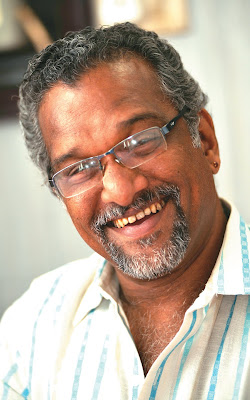 For Thachom Poyil Rajeevan, who writes in Malayalam and English with equal felicity, poetry is something he breathes in and out every moment. His verses have been translated into more than a dozen languages. He is also an acclaimed novelist in Malayalam — his novel Paleri Manikyam was recently adapted into an acclaimed movie, starring Mammootty.
Recently his bilingual volume of poetry on, yes, love was published by Mathrubhumi Books (Rs: 100; Pages: 158) titled Pranayasatakam, richly illustrated by Kabita Mukhopadhyay.
Rajeevan recently spoke with Sunil K Poolani. Excerpts from that conversation:
From a serious poet writing in Malayalam and English what prompted you to pen a bilingual volume of poetry on love?
My generation, I always feel, have grown up without the experience of love — not just love, but all the natural and spontaneous life aspects associated with it. This was mainly because what the modernists, our immediate predecessors, irrespective of their ideological orientation like capitalism or communism, had taught us that, that personal experience was insignificant and what we must try to express in creative life was our social existence. So, I had a preconceived notion for long that love was a bourgeois concept. Now, looking back, I regret that; caught in ideologies, I have wasted my life. For me, these love poems are my attempts to come in terms with the naturalness of life.
And, as regards the bilingualism, I made it bilingual because it contains poems written both in Malayalam and English originally. And, in fact, in the process of writing, the English ones were spontaneously translated into Malayalam and the Malayalam ones into English, in such a puzzling way that finally I lost the sense of the original. I think this is the problem of bilingualism. It’s a border area where you lose your acquired identity and get hold of a new one. A bilingual writer, sometimes, I feel, is an intruder who can be caught anytime for violating laws and standards and, all at once, an amphibian, like a translator.
What inspired you to write this series of work? And how did the discerning constituency of your readers receive it?
There has always been an interval, a period of silence in my writing. My first collection was published in 1991, the second one in 2000, and the third and fourth in 2006 and 2009, respectively. And these poems are the ones with which I filled the gap of silence. They came to me naturally and uninvited.
I think poetry must encompass the totality of experiences and address the silence that often goes unattended in life. In Pranayasatakam, the point, if there’s anything like that in writing poetry, was to project love not as just a carnal desire but as a longing to be one with the ultimate, transcending time and space, capturing the moments of ecstasy, agony, weariness, sensuality and spirituality of life — a metaphor for what is inexpressible, a celebration of the unique.
And interestingly enough, with these poems, I’ve got a new constituency of readers, the younger generation. Almost all the poems in this collection are now being circulated through SMS without mentioning whose lines are they. And I’m happy about it. I’m against creating a permanent constituency of readers. It’s a political strategy.
As an acclaimed novelist in Malayalam, which medium are you most comfortable with? And what do you think is the future of poetry in the two languages you delve in?
Poetry is my all-time favourite medium. At the same time, there are experiences, which I find, cannot be transformed into the format of a poem, owing to its generic character. That’s was how I began to strike out towards a novel. The novel is about an onerous journey into the past undertaken by a crime investigator to uncover the mysteries shrouding the death of an innocent, young woman in my village, Paleri, in the 1950s. Set in the period of the first Communist government in Kerala, the novel portrays the transition of an Indian village from feudal system to modern democracy, unravels the nefarious nexus between the police, the criminal elements and the political establishment, and speaks of the women predicament; all relevant even today.
For me, poetry primarily is a personal medium. And in it, there’s something that doesn’t allow it to die. The most ancient of all human expressions, it’s as fresh as something just invented. Poetry always tempts us to attempt a definition. But, the moment we define it, it itself disproves the definition. There won’t be any other literary medium like poetry that has undergone so much misuse and abuse. Still it survives. Often, it’s not the medium of the winners, but that of the defeated, a loser’s medium. I think it’ll continue like that, in any language.
-- Sahara Time
Posted by Frog Books at 3:54 PM 3 comments:

Interview with Sindhu Rajasekaran in ToI 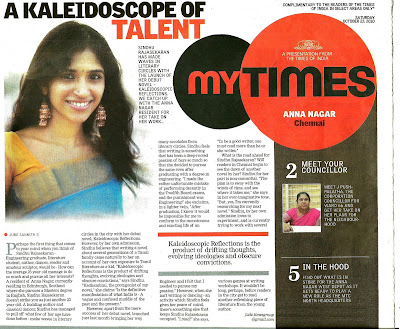 Posted by Frog Books at 7:34 AM No comments: