Though I have written — and continue to write — for several national and international print and electronic journals, I have never received the kind of responses I get from the readers of the paper you are now holding in your hands.

The responses have been a torrent, if not mind-blowing, and they are of all kinds: prospective authors trying to send their manuscripts, criticisms (reiterating that my writing is pretentious), overwhelmingly patronising…

But I was touched when, last week, a Chakravarti from a small Andhra Pradesh town, wrote to me, requesting, I should bestow on him tips to improve his writing skills, and tell him which all books would eventually ensure that. He wanted to write a ‘good manuscript’.

I, a college dropout, am hardly a person to help him, I told him as much, but promised I would share some thoughts that had cropped up while delighting in some good writings that I have come across in my short life.

For me, George Orwell is god; he will always be. Apart from his 1984 and Animal Farm, those great political expositions in literature vivifying the traps of both capitalist and communist hegemonies, I was really fascinated with his non-fiction, which talked about the English language and its use.

For any writer worth her or his salt, Politics and the English Language, Why I Write and Writer and the Leviathan are must-reads that should be imbibed into the system. When I compiled the above three essays for a volume one year ago, Ramachandra Guha wrote in the Foreword: “[Orwell’s] clarity of language, his moral courage, and his principled independence from party politics set him apart from the other writers of his generation, and from those who have followed since.”

Orwell was always consistent with his claim that prose degenerated into purple passages whenever it lacked political purpose. And as Orwell once said: “[English] becomes ugly and inaccurate because our thoughts are foolish, but the slovenliness of our language makes it easier for us to have foolish thoughts.” He died an untimely death, and that is a pity.

Now, many readers may think this is a devious digression — from someone as meticulous and marvellous as Orwell to, well, a carefree and iconoclastic Hunter S Thompson. But Thompson, mainly due to his irreverence to everything around him, shaped the way I thought and wrote. And I was particularly in awe of the company (of the New Journalism ‘movement’) he kept. 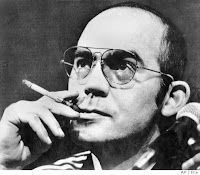 A great collection that I still admire is The New Journalism, edited by Tom Wolfe and EW Johnson. This comprised the best ‘literary’ journalistic pieces I have ever read, written by — apart from Thompson and Wolfe — Rex Reed, Norman Mailer and Truman Capote. Fully doped, Thompson wrote The Kentucky Derby is Decadent and Depraved, a seminal sports article; it still remains a marvel in both journalism and literature — a rare achievement.

Thompson’s much-publicised work is the Fear and Loathing series. Nevertheless, his short works, published mostly posthumously, really stand out. In The Mailbox he talks about his confrontation with the FBI and he sums the article thus: “Never believe the first thing an FBI agent tells you about anything — especially not if he seems to believe you are guilty of a crime.”

If you are in the august company of Orwell and/or Thompson, who needs to dope? Or a stiff drink?

I used to work with a national weekly some years ago. We were bringing out a special on Orwell on his 50th death anniversary. A trainee sub-editor was asked to make the page in which we were reproducing Politics and the English Language. When I was checking the page before sending it to the press I realised there was something amiss in the Orwell classic. What happened, I asked the scribe. His reply: “Well, the whole article did not fit in the page, so I had to edit it.” Now, that is what I call guts.

While growing up reading good literature, it was not books that really fascinated us, but literary journals in which not just stories, poems and essays by the crème-de-la-crème of the writing world appeared, but those publications also carried analyses of and interviews with great writers, and reviews of their books. Armed with those journals, we debated and literally fought for hours, days, weeks and months together about the contents.

In those pre-liberalisation days, we could not afford the price of those journals (between Rs 2 and Rs 15), and at least ten poor souls use to savour one single copy; by the time that copy did that tortuous round, it resembled an opponent in a Schwarzenegger movie: pulp.

Then, unlike today, many large-selling publications from the stable of big media organisations devoted a fair amount of space for good writing. In English, there were the venerated Illustrated Weekly and the magazine; both closed shop long time back, thank you. But it is heartening to know that some regional languages still follow that tradition — like Mathrubhumi in Malayalam and Desh in Bengali.

Also, there were these brilliant ‘little’ magazines that originated, since centuries, in far-flung areas like Shantiniketan and Karimnagar, espousing issues as diverse as Robindra Sangeet and Naxalism. They had the lives of fireflies but they burnt bright when they were alive, and every death encouraged another firefly to take shape and shine.

In English, apart from the government-sponsored daft efforts, there were, in the last two decades, some great journals that made a deep dent in literary minds. Civil Lines was one. Founded by the indomitable Ravi Dayal, Civil Lines swiftly became the abode of quintessential new Indian writing. Later, it was edited by the talented duo, Mukul Kesavan and Kai Friese. Nonetheless, like its brethren across the spectrum, it too died an immature death, but not before leaving an indelible mark — challenging the till-then norms by refusing to publish to a set schedule.

There were also similar literary endeavours (some still do exist, just in case) like Chandrabhaga, Biblio, Kavya Bharati, International Gallerie and Yatra. All these followed the model of their international ‘Bible’: the esteemed Granta, the UK-based journal which continues to whet many a connoisseur’s taste for new and good writing across the globe.

Today, literary magazine is a diminishing trade and a difficult passion to indulge in; no serious publisher in the world would risk burning her/his fingers in it today. In the last four years, the third issue of my ambitious ‘quarterly’ journal, Urban Voice, just came out. I, nevertheless, would like to bring it out periodically.

So that is why I watch with rapt admiration when I come across two amazing ventures, Atlas and Little Magazine. The former is brought out by the talented poet and prose writer Sudeep Sen and the latter by a dynamic duo, Antara Dev Sen and Pratik Kanjilal.

Little Magazine has, so far, stood the test of time, and has carved a niche of its own — offering, issue after issue, some of the best original writings in English and translations from even remote Indian tongues. Atlas is just two issues old, and Sen was explaining to me the vicissitudes of all kinds while producing a volume of this oeuvre. “It’s a tough game, unless you have loads of money.”

Hope these last vestiges of intellectual sanity live on in an arid land of crass commercialisation.

C P Scott, the founder editor of The Manchester Guardian, once said: “News is sacred, opinion is free.” If our newspapers hardly believe in reporting news and resort to concocted opinions, a new breed of Indian novels is today banking on contemporary issues and polity for cheap, titillating fictionalisation. What next? I will leave it to you.