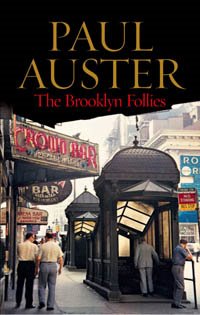 The author has the unique ability to celebrate tragedy, not an easy task

If Sartre and Camus were once the great existentialist double-act, Paul Auster, in Brooklyn Follies (his magnificent new novel) draws a picture of Nathan and Tom, an uncle and nephew double-act.
To quote Bryan Appleyard, if Sartre and Camus were, “the intellectual heroes of the black-clad, white-faced generation that became, later, the beatniks and hippies,” Nathan and Tom are the archetype of one another: Nathan, a divorced, lung-cancer patient looking for a quiet place like Brooklyn to die; Tom, who wants to get away from life and a once-promising academic career in general. But yes, they are the present-day, Bush-period existentialists (a rare breed to find in the USA today) who are in love with Kafka and seem to know every titbit of the German genius’ life.
Brooklyn Follies is full of unexpected twists and turns that occur in a sleepy little American town. The incidents are quirky, most of the time subtly and dryly hilarious; at certain times the passages may sound slow and uneventful, but suddenly there are these magical-realistic occurrences that hold the reader by her/his jugular vein.
Characters vividly flash through the pages. The bisexual Harry Brightman — ex-convict, ex-con art dealer and the owner of the shop (where Tom works) that deals in antique books — really stands out. So does Lucy, Tom’s impertinent niece who comes into the duo’s life. Lucy, who refuses to speak most of the time, unwelcomingly acts as a catalyst, bridging the men’s past which quite often offers them the possibility of redemption.

Their colourful lives
Tom couldn’t have asked for a better partner; Nathan is a facilitator in several respects. Thanks to Nathan, Tom can talk to his dream women, Nancy Mazzucchelli, a mother of two and a jewellry-maker. Then there is Nathan’s infatuation with Marina Gonzalez, a waitress, to whom he presents a necklace, which eventually turns out to be a bone of contention between her husband and Nathan.
Both Nathan and Tom have a disturbing past and a wrecked family, whichever way you take it. If Nathan is a divorcee and has a daughter who hates to talk to him, Tom has a wayward, bohemian sister who is a former porn actress and who enigmatically disappears often, only to reappear in different avatars.
Nathan finds solace in writing a humble book, The Book of Human Folly (though the title is, to his own admission, pompous), in which he is planning to set down, in the simplest, clearest language possible, an account of every blunder, every pratfall, every embarrassment, every idiocy, every foible, and every inane act he had committed during his long and chequered career as a man. Brooklyn Follies is that book.
The end is predictable, though, but what matters are the dramatic and colourful events that unfold in between the covers.
Auster has this cute ability to celebrate tragedy; it is not an easy task. He has mastered the skill now in this novel after he experimented it in his earlier books like The Book of Illusions and Oracle Night.
A racy read, this book is highly recommended to all Auster aficionados and new readers alike.
— Sunil K Poolani / Deccan Herald
Posted by Frog Books at 4:18 AM No comments: