Of migration and hopelessness 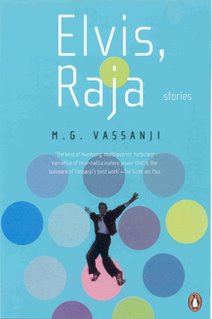 Rootlessness is an irritating and intriguing dilemma. Many Indians have faced it thanks to the British who took them to indentured excursions across the world. They live in these plantation-countries for some three or four generations. In some cases the present generation may not be the great-grandchildren of indentured labourers but, say, that of Gujarati traders in .

Rootlessness is also a problem with the second-generation American and British Indians, too. And all these children who may or may not have missed the start becoming ponderous. And when they become ponderous the result is that they pen a book. And we have been witnessing an abundant, though not robust, variety of them for some time now and there is no end to endurance in sight. Elvis, Raja by M G Vassanji is the latest in the pantheon.

Vassanji, who is the author of five critically-acclaimed novels in the past and who is a name to reckon with among Canadian-Indian writers today, has penned twelve stories of migration, traumas, bitterness and hope (or is it hopelessness?). True, Vassanji has style — and in some stories substance — and his craft is thousand times better than the sob stories written by behanjis sitting in high-rise apartments of or Southall.

Vassanji has got the drift right, and he does not try to bring in all the clichéd problems of the irritating Indians living abroad — like their love for pickles and agarbatti. Instead, he tries to focus on the extraordinary, vividly portraying his characters’ diverse dilemmas, sans losing grip of the Indian identity.

So far so fine. But the problem with this book is it has nothing new to say. Just another one dozen short stories. Maybe the exceptions, though not really, are the title story and When She Was Queen. In Elvis, Raja Rusty worships Elvis so crazily that he creates a shrine to the legendary singer. Diamond, his college chum, traumatised because of his unfaithful wife’s deeds, finds himself trapped in Rusty’s and the Pop King’s world of trance.

When She Was Queen gives an excellent peep into the lives of the Indian community living in . But what took me by surprise was the first line of the story, which apparently is the first story of the book: “My father lost my mother one evening in a final round of gambling at the poker table.” Haven’t we heard a somewhat similar beginning in a Marquez book?

The tales range from Gujarat to and are a tad better than many of today’s short story writers of Indian origin. But what makes me happier is that many publishing houses in and abroad have started taking short story collections seriously, slowly lifting this genre from a poor cousin status.

Posted by Frog Books at 2:21 AM No comments: