Nothing but a bad joke 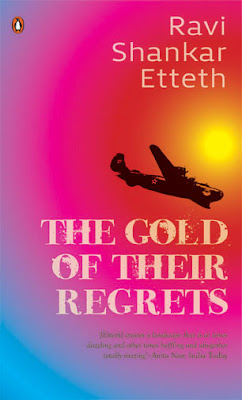 Sunil K Poolani
----------------------------------
The Gold of Their Regrets
Ravi Shankar Etteth
Penguin India
Price: 250; Pages: 227
----------------------------------
One-two chapters into reading, I was not sure what is the genre of this bizarre book that I was, excruciatingly, trying to make sense of. Serious fiction? Plain fantasy? Historical novel? Or a joke? When I was through I got my answer: it is nothing but a bad joke. Why? Will come to that.
For that you need to know the story (or the lack of it). The supposed thriller begins in circa 1945. A Mitsubishi K1-21 bomber — carrying Subhas Chandra Bose (the commander of the INA), his trusted bodyguard Bezbaruah and 30 million pounds in gold with Nazi imprint, crashes — nothing more is learnt about it since then. Three men masterminded the crash, so tells Etteth, and only the trio still knows what happened to the gold.
Sixty years pass. Bezbaruah’s son, now a trained mysterious killer, is all set to kill the trio and accumulate the wealth; also in the process he learns where his dad’s remains could be found. Now, the Killer is a Tarzan, invincible, and knows everything that is going on in Indian intelligence agencies; he can reach anywhere, anytime, like Superman; he is invincible, like Mandrake. He is ruthless, like Jack the Ripper. Until… until he finds out that his opponents are no lesser mortals: Anna Khan (super cop, whose husband was killed by a Kashmir militant), and Jay Samorin (martial art specialist from a Kerala royal family). Khan and Samorin are now together and have sex all the time when they are not doing dishum-dishum.
DCP Khan and her fighter-gigolo friend are all set to find out how Samorin’s wild pet, Bharadwaj (one of the 1945 trio), his daughter, her lesbian girlfriend, the lesbian girl’s boyfriend, and lastly Khan’s own dad (the second of the trio) were killed. And naturally they want to nab the Killer and squeeze him to death.
The story revolves around Delhi, Kashmir, Haridwar, Kerala… sans any honesty, subjectivity or any sense of timing. Difficult to believe? So what? It is fiction, right? Wrong. Etteth is only interested in showing off his knowledge of a Delhi high life (Versace, Prada, Armani), his convoluted vocabulary, and his possession of the ‘historical’ facts of the INA. But, ahem, they do not contribute to the continuity of the narration he intends his readers would scurry through.
Sorry for the digression. The story is not over yet. Then comes a character called Tulsi, who seems to have even wooed Alexander the Great, is the godmother of all the nefarious and internecine happenings in the whole world, and can even get pregnant by Samorin (so what she is in her eighties — or is it 180s?
Now, the third of the trio happens to be Samorin’s dad. Ha, ha. So believable. And this Tulsi, who is ravishingly beautiful and has had sex with almost all the royals, fighters and mafia goons since a century, is the person who helps Samorin and Khan to get rid of the killer. How? She personally kills him. And the final truth is revealed: the Killer is Tulsi’s son. Surprises galore? Unless you feel like throwing up.
If this weren’t a ‘serious’ thriller, and a joke book, I would have loved it. Nevertheless, I am sure Etteth did not mean it so; so might be the commissioning editors of the novel in question. To be frank, the book is a page-turner; in a way that, you read it in disbelief but with a suppressed smirk. And, hah, the language is good at times. But lexis is, fiction is not. Other defining and ‘entertaining’ moments in the book are the varied sexual activities: from lesbianism, voyeurism, to even bestiality.
The talented Ravi Shankar (Etteth) should have stuck on to what he is really good at: political cartooning and social commentaries.
-- Deccan Herald
Posted by Frog Books at 1:56 PM 12 comments: 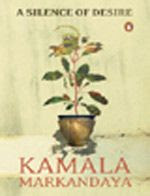 Certain wonders never cease to enchant. Be it the Taj. Be it the Egyptian Pyramids. In literature, too, there are unmatchable gems that stand the test of time. Like Homer’s Odyssey. India also has (now, not talking about the Vedic classics, here) an array of quality writers’ works that refuse to stop fascinating you. The ever-effervescent Kamala Markandaya is one writer.
First published in 1960, about a middle-class Indian family, Markandaya’s A Silence of Desire stages a seamless comeback. Why so? Because it is crafted in a deceptively gentle style in simple-yet-evocative language, much like its leitmotif, the tulasi tree in a homely courtyard, portraying the silent symbol of faith and family. And Penguin decides to publish it, like many of her earlier works, this year, too.
What makes Markandaya so special? For which you should reread the story, at least of the book in question. Sarojini is the dutiful wife of Dandekar the clerk and mother of two daughters and a son: 12-year-old Ramabai, 10-year-old Lakshmi and the youngest little son Chandru. Until one day.
“Three children, no debts, a steady job, a fair pile of savings that his wife regularly converted into gold… ” What more could Dandekar ask of Sarojini, his wife of 15 years, who tended to his neat and orderly needs and was good with the children? She met all his demands placidly and listened to his account of another day in office with the same patience and regularity. And he was always grateful to her for keeping her report of the day brief — ‘not bad’ was good enough.
All is quiet until the day he comes home from office to the deafening sounds of Chandru’s loud crying, the servant girl helpless and whining and his two daughters squabbling. Sarojini is not home. Strange. She says she went to see her Cousin Rajam.
Well, the last day of the month, when, as usual, Dandekar goes shopping to buy little gifts for his family with the money he saves on bus fares by walking to and from the office… who should he bump into but Rajam herself — enquiring about Sarojini who she hasn’t seen for four months. Quite strange. Dandekar hardly hears the rest of the conversation and breathes an uneasy sigh of relief only when Sarojini tells him that was Cousin Pankajam she saw. More unease when he opens the old tin trunk under the bed in search of an old book and sees the photograph of a strange man — a married woman did not have men friends who were not known to the husband, did she? The seed of doubt is sown and starts to show in his demeanour in the office also.
He starts coming back home at odd hours to find his wife not there, the servant dismissed and the children on their own. And one evening he finds his wife sitting cross-legged in the courtyard praying intensely by the tulasi, lamps lit and the man’s portrait garlanded. The dutiful Dandekar, obsessed, takes leave from office and shadows Sarojini. More lies follow. He confronts her about her ‘affair’ and for the first time, she takes her hands away from her face and he sees her face naked and wet; she had always covered her face when she wept.
Has he lost her to the Swamy? Will he be able to persuade this man to go away and give his wife back to him? Does the Swamy teach her the secret of detachment even to accept his own leaving? Sarojini’s one line says it all: “It would be sinful to batter oneself to pieces because one refuses to recognise that another’s life is his own.”
The blurb on the back cover of the book does not prepare you for the deeper storm inside. This is no simple East-West or faith-versus-reason argument. We wish the author were alive to see her readers get all the meanings she has brought out so subtly and, yet, powerfully.
A Silence of Desire is a gentle book spoken almost in silence, but it grips and keeps you thinking about it long after you are through with it. No wonder her work is prescribed reading for students of literature in many American and British universities.
Final touch: It would be too limiting to call this work the usual ‘Indian writing in English’. It is universal in its theme and relevance.
-- Deccan Herald
Posted by Frog Books at 6:35 AM No comments: