It is elementary, Mr Basu 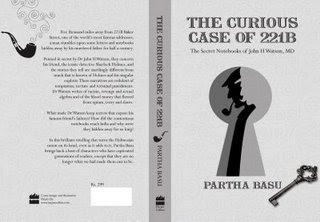 Sunil K Poolani
---------------------------------
The Curious Case of 221B
Partha Basu
Harper Collins
Price: 299; Pages: 277
---------------------------------
Any person who reads in any major language in the world would be familiar with 221B Baker Street and its famous inhabitant. Arthur Canon Doyle’s famous creation, Sherlock Holmes, the detective par excellence, and his extraordinary gift to solve crimes — and even his narratives to his British doctor, Dr Watson, who becomes the friend, sometime roommate, and sidekick — are part of our lexicon and occupy permanent space in our minds till we kick the bucket.
Holmes is like an addiction, or an energy, that refuses to leave our bodies; we are like Obelix, in Asterix comics, who has no need to drink the druid’s magic potion, because he fell into the cauldron as a baby, making its effect upon him permanently.
So it is with much trepidation that I started reading Partha Basu’s first book — a Holmesian, mind you — in which the detective and his storyteller-doctor appear, not in the cobbled streets of London but in distant Calcutta. And I am, after reading the book with tremendous mental pain followed by an excruciating headache, realised that my initial apprehension turned out to be true: Basu can never be Doyle and it is a crime he even tried to do it: a mystery only the original Holmes can ever resolve.
It is the stupid narrative style that will put many a readers in a tizzy. Narrative after narratives, interspersed, in different fonts: by Jit, who apparently stumbles upon a letter sent to his slain dad by Dr Watson; by Emma Hudson, in whose house Homes stayed; Dr Watson himself; and Julia Stoner. As if these are not enough the book has copious amounts of ‘newspaper clippings’ in not only in a different font but in different layouts.
So what is the story about and what is the mystery involved here? Jit discovers certain letters and notebooks that were stashed away by his deceased dad for more than fifty years. The notes, which involve Holmes and Dr Watson, “are redolent of temptation, torture and terminal punishment.” Why? Dr Watson writes of racism, revenge and sexual algebra and the blood money that flowed from opium, ivory and slaves.
The mystery is how and why did these papers reach India of all the places? Basu is trying to ‘find out’ why, and the readers will get to know why if s/he can reach the final pages of the book, which is hugely unlikely. The only plausible reason I can reach why the papers were found in Calcutta is that Basu wanted them there. No one else. Why blame poor Dr Watson or Holmes for that?
Who is this Basu? Apparently he was a corporate honcho and a BBC Mastermind India semi-finalist, which explains why he gets all the knotty questions and so-called mysteries and suspense that he worthlessly weaves into a narrative (or the lack of it) which lacks charm.
The blurb-writer has the audacity to even say that this is a “brilliant retelling that turns the Holmesian canon on its head” and the ‘present-day’ Doyle has “[brought] back a host of readers, except that they are no longer what we had made them out to be”. Even this could have been justifiable if Basu would have used the same simple style Doyle employed, which, even after a century, reads like a dream; instead our man uses all his skills to showcase his vocabulary to hapless readers.
Now, Holmes would have said, unless he is not turning in his grave: “It is elementary Mr Basu, do not try to be a Doyle.”
-- Sahara Time
Posted by Frog Books at 10:27 AM 2 comments: