Mumbai’s lifeline and the lives that depend on it 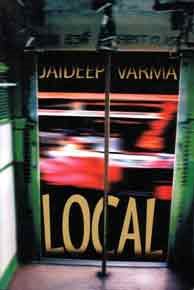 Hi pals! Here is this good friend of mine, Jaideep Varma, who has written this wonderful debut novel, Local, published by Indialog, Delhi. The story? Well, its about Akash, 28, who works in a multinational by day and lives on a local train at night. The contradictions of his two lives change him forever. I can assure you that it is an innovatively-structured, highly entertaining novel about the real, everyday Mumbai.
For those who wants to know more about the author: Jaideep was born in Kolkata in 1967, and grew up in Chandigarh and Pune. After a short stint in Chennai, he has been in Mumbai since 1990. He was in the advertising business, but since 2000, has been writing fulltime. He has also written for publications and websites such as Gentleman, Tehelka and Rediff. Local is his first novel.
You could buy this book from us as we do the distribution in mainly Mumbai. Contact: editor@zzebra.net Or you could buy the book from Amazon. Here is the link: http://www.amazon.com/gp/product/8187981997/ref=sr_11_1/103-3523255-3860601?%5Fencoding=UTF8
Posted by Frog Books at 2:36 AM 1 comment:

There is something rotten in the labyrinthine corridors of the National Agricultural Cooperative Marketing Federation Ltd (Nafed). Well, the stench has been getting exposed in the media for some time now, but certain pertinent questions still remain. Unanswered. Nafed deals with many products. So, where do we start?
Let’s take copra for instance. A study of certain basic facts and figures has prompted one to look into the following aspects: From April 2000, till it stopped procurement six months later, Nafed had procured 1.2 lakh tonne of copra at the minimum support price (MSP) of Rs 3,250 per quintal as against the market price of Rs 2,000.
This, says a Nafed source, is less than 15 per cent of the total production — the rest has been apparently sold off by farmers at the market price. Well, now the question arises: When all the farmers know about the MSP, why are they not selling to Nafed at a much higher price of Rs 3,250?
The sources give a four-part answer:
1) Nafed has limited funds allotted to it — about Rs 500 crore. With these funds, if it has to prop up the market price to the MSP, it should buy the entire quantity in one to two months. But, as it is known now, Nafed does not do this, probably because the market will crash again when the funds dry up.
2) Since the funds are inadequate, the meagre procurement by Nafed is far from adequate to raise the market price to the MSP level.
3) This situation, then, gives ample chance for discretionary procurement, which facilitates chances for fraud by middlemen and some Nafed officials.
4) Nafed officials ensure that they do not procure from the farmers’ cooperatives that are not in ‘league’ and buy only from a handful of very powerful, politically connected middlemen, who buy copra from farmers at the market price of Rs 2,000, and sell it to Nafed at the MSP of Rs 3,250. So far, these middlemen have bought 1.2 lakh tonne of copra at Rs 240 crore and sold it to Nafed at Rs 390 crore.
A clean, cool profit of Rs 150 crore. Simple mathematics — and all at the cost of the national exchequer. ‘‘Evidently, the money from the exchequer, which is supposedly meant to help farmers, is not reaching them. Instead, it goes into wrong hands. Not satisfied with the killing made this year, there is a concerted effort to raise the MSP next year to Rs 3,650, so that the stakes are higher,’’ says a Nafed official.
To add insult to injury, Nafed has been collecting copra in its godowns since April 2000. Unlike grains, copra is prone to fungal attack on storage, besides being attacked by insects. Informed sources in the industry say that unless this copra, bearing a market price of Rs 240 crore, is not quickly liquidated, most of it will have to be thrown into the Arabian Sea.
The option before Nafed, or the government — that is, if they are willing to perform — is to immediately investigate the scam, as big stakes are apparently involved. Also, Nafed must be directed to liquidate the 1.2-lakh tonne of copra, lest it rots.
In the medium term, it is suggested that the government ensure a transparent mechanism of procurement by Nafed, so that any farmer’s cooperative that wants to sell to Nafed can do so and no discretionary powers of rejection should be vested in the federation. It is popular knowledge that the low coconut oil and copra prices have been caused by a rampant adulteration of coconut oil by palmolein and liquid paraffin. ‘‘Respective state governments have been completely ineffective in stopping this menace because of vested interests,’’ say the sources. ‘‘What the government should do now is to impose a 50 per cent duty on coconut oil and copra and encourage higher productivity in coconut farming.’’
The issue is of such magnitude that even Tamil Nadu Chief Minister J Jayalalitha, who herself was embroiled in several corruption cases, had alleged that two state ministers in the previous M Karunanidhi-led DMK ministry and their cohorts had deprived coconut farmers of about Rs 16 crore out the procurement price for copra offered by Nafed. Nafed, she had said, had paid Rs 41.275 crore for the 12,700 tonne of copra procured so far. ‘‘Out of this, middlemen and benamis had reportedly defrauded a sum of Rs 15.875 crore.’’
Several attempts were made to get an official version from Nafed on the above aspects. But Nafed officials, however, wants to remain mum on the whole issue.
And this is about copra... just one commodity that Nafed procures.
— Sunil K Poolani

What is Nafed
Nafed, which functions as the national apex body of cooperative marketing in the country, was set up on October 2, 1958. It is under the administrative control of the Union ministry of agriculture. The organisation’s job is to promote cooperative marketing of agriculture produce for the benefit of farmers. Nafed is also responsible for internal trade covering a wide range of agriculture, horticultural, tribal and allied produce. When directed by the government, it also implements market intervention scheme for horticulture and other crops in order to provide market support to the farmers. Export and import of various agro-products, like fresh fruit and vegetables, oilseeds, spices, foodgrains and pulses, are all streamlined through Nafed.
Posted by Frog Books at 2:27 AM No comments: