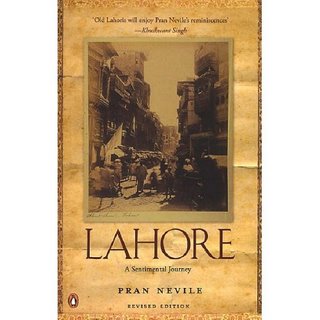 ------------------------------------
Lahore: A Sentimental Journey
(Revised edition)
Pran Nevile
Penguin
Pages: 207; Price: Rs 250
---------------------------------
A city is the confluence of many centuries-old travels, and travelling (and in this case back) to that city is a venerable ritual of accumulating the dust generated by these journeys in this span. For Pran Nevile, travelling back to his hometown, Lahore, is not like a backpacker crisscrossing the European capitals on a Eurorail trip. For Nevile, the umbilical cord with Lahore was snapped when the Indian subcontinent was violently divided, and revisiting the same is not just a sentimental journey but reopening old wounds, and it is so gentlemanly of him that he does not bother his readers with his personal losses.
Instead, what Nevile pens is a magnificent tribute to a city and its life of the 1930s and the 40s. The book talks about Lahore’s history in lucid detail; the emperors, plunderers, traders, builders, colonisers… We are made to understand that in that era, Lahore, apart from very few cities like Bombay, was the most happening place — be it cinema, cuisine, fashion, fun and frolic, politics, love and sex. Nevile has this uncanny knack to divide all these neatly into different chapters and talk about it enchantingly, peppered with Punjabi anecdotes and a bit of personal experiences.
While savouring the book, one was amazed at the life the Lahorias led. They had everything and even in 2006 it gives a feeling that we have nothing new that Lahore then possessed; no, we are not talking about laptops and cell phones.
The book starts befittingly: Lahore’s Anarkali, the queen of shopping centres in the Punjab. The chapter delves deep into Anarkali, a visit to which is considered a status symbol and in the whole of North India there was never such a market where shoppers offered almost anything under the sun.
Another interesting chapter is totally devoted to kite-flying. Why? “Kite-flying had been a passion with Lahorias who waxed eloquent of their kites and boasted of their accomplishments in this field.” Nevile has to offer numerous gems in this city’s passion for this sport — love, death, triumph, all mixed.
A city is an amalgamation of a whole range of elements: good, bad and ugly; wise and vice; sin and sincerity. Lahore is no different. So do not feel surprised when you see a whole chapter devoted to the “ace pimp of Lahore,” Fazal. There are other sections that deal with women and their changing attitude, live dance and song, miracles medicines and sex manuals, punters, bookies, politicians… The list is endless.
This new revised edition (the book, though conceived in 1963, was first published in 1993 and is achieving a cult status) is embellished with rare photographs, newspaper clippings, advertisements that jell well with the text. Some of the advertisements are uproariously hilarious. Savour one: “Wanted very sharp – a suitable match for a rich and healthy Khatri Engineer, age 35, drawing Rs 350 monthly, having a large Banking Account and willing to deposit Rs 10,000 in the name of his new wife.” Annexure like Songs of a Bygone Era, Select Bibliography and Glossary complete the picture. Despite all these plus points, the book, even in its third edition, is crying for a tighter editing.
Nevile, who has written extensively on Indian art and culture, is the author of many books on the Raj — and Lahore is the finest feather in his cap.
— Sunil K Poolani
(Deccan Herald; 13 August 2006)
Posted by Frog Books at 3:51 AM 1 comment: