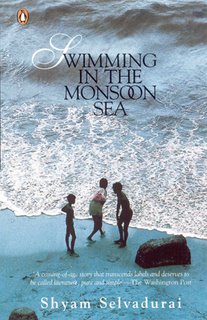 This is a tricky novel. No, don’t get me wrong. What I mean is it is so cleverly written that Shyam Selvadurai, the author, has massively struggled to get the language simple. (To those who haven’t heard this before: to write simple English is anything but simple.)
Born in Colombo, Sri Lanka, and moved to Canada at an early age, Selvadurai is one of the best writers in English Serendip, as the picturesque island was known in the Veda period, has produced. The others being, Romesh Gunesekera, Michael Ondaatje and Jean Arasanayagam.
Together they have created what is called the Sri Lankan writing in English an enviable position in world literature. What if most of them are no longer residents of the country they hail from.
Now, Swimming in the Monsoon Sea, the latest and the most vibrant work by Selvadurai so far, narrates an unassuming story of a fourteen-year-old boy named Amrith whose trials and tribulations take the reader to new platitudes. Amrith is an orphan; well, somewhat. He is being raised by the vivacious and no-nonsense Aunty Bundle, the best friend of his deceased mother, and the kind-hearted Uncle Lucky. The couple has two daughters, Selvi and Mala, who provide a taunting presence throughout the book, though they love Amrith like a dear brother.
Despite the love and affection Amrith get from the family and other friends (and he is considered to be a role model “son” among other households) he is a loner, always finding solace in things unnatural. The story then talks about how his father and mother died and how he became a virtual loner, adoption apart. Mystery shrouds the death of his parents, though it is not explained in lucid detail, and there is no need to. The life goes on and lots of characters appear and disappear: Kuveni, the mynah which refuses to talk; the scandalous Lucien Lindamulage, the gay architect; Miss Rani, who is the manager in the office of Uncle Lucky, who shares a mystical relationship with him.
Then comes the Inter-School Shakespearean Competition, a yearly event, which has a major role to play in both the life of Amrit and also the novel. The previous year Amrith had played Juliet and had won the cup for Best Female Portrayal from a boys’ school. And the current year they are playing the last scene from Othello, and the novel, in vivid detail, describes his relentless effort to bag the coveted role of Desdemona, Othello’s wife. He almost lost the role to a boy named Peries.
Life still goes on and then happens — or arrives — an incident which will totally change the profile of the protagonist. One day, Uncle Lucky encounters, while Amrith was along with him, a person on his way to their office, where Amrith goes to learn typing. He is Uncle Mervin, the brother of Amrith’s mother. Uncle Mervin (and his father) was always unkind to his sister and he is now in Sri Lanka (he lives in Canada with his son Niresh; Uncle Mervin is divorced and his wife has married a Christian evangelist-farmer) to sell off an ancestral land in which Amrith too can stake claim as it was a land so dear to his mom. Amrith, in the meantime, learns about the details of his mother’s family life and the cause of her bitter conflict with her brother.
It turns out to be that Niresh, who has accompanied his dad to Sri Lanka, is too keen to meet up with his cousin and forge a bond. Niresh is an impertinent spoilt brat who always insults his father, and Uncle Mervin doesn’t approve at all of his son’s new-found relationship with Amrith. What follows is a hilarious double-act, and both of them start liking each other; the two cousins even almost reach the level of exploring each other sexually. Amrith attains confidence due to his Canada-returned, cigarette-smoking cousin and his world view, too, changes in the course.
With Othello as a perfect backdrop, the narration then reaches a level where Amrith finds himself totally inundated in a disastrous jealousy. One complaint this reviewer has towards the book is that the title is misleading: there is some swimming, but less of monsoon and sea. And the beautiful cover, too, depicts the same.
That apart Selvadurai, whose earlier novels Funny Boy and Cinnamon Gardens had placed him firmly in the literary firmament, has upgraded his points with this lush, languid but pure and simple novel. Three cheers to him.
— Sunil K Poolani / Sahara Time
Posted by Frog Books at 12:54 AM No comments: