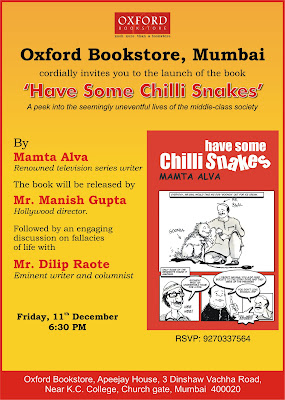 Oxford Bookstore, Mumbai hosts the book release of Have Some Chilli Snakes by Mamta Alva

Mumbai 11th December 2009: Oxford Bookstore, Mumbai today celebrated the launch of ‘Have Some Chilli Snakes’ by Mamta Alva. The release was followed by an engaging discussion on life and its values upheld by the middle class with eminent writer and columnist Mr. Dilip Raote. The occasion was made special with the presence of Mr. Manish Gupta the renowned Hollywood Director of realistic movies including ‘Karma aur Holi’ starring Naomi Campbell.
Based on the real life stories of middle – class society residing in an archetypal Mumbai suburb, ‘Have Some Chilli Snakes’ comprises of extramarital affairs, compulsive gossip, a much-hated dog-lover, youngsters eloping, the loud Punjabi family, the smuggling Shahs, the spying neighbours, the wife-beater, the simple housewife, the flirtatious Jhatka all set in Jolly Apartments - a housing society in Mumbai. While residents of Jolly Apartments live mediocre and ostensibly uneventful lives, their closed doors hold a different story.
The book not only presents us the characters we encounter on a daily basis but also subtly reveal the hidden truths that mark their existence. The skeletons are brought out of the cupboard and we realize how masks have to be worn to assume normalcy in real life and acceptance from society. The book tells us how the purpose of living is missing or cleverly made obscure by the rule driven social order.
While talking about the book, Mamta Alva said, “With full of colourful characters, vivid settings, mundane lives, the book brings out real-world colloquial charm. It is a true portrayal of individuals whose aspirations and mental processes are often curbed with conflicting values, which persuade them into petty indulgences. However, in times of crises, the differences melt and they stand united to face it as a trouble of their own. I am grateful to Oxford Bookstore for providing the platform for the book launch.”
About the book: “Have Some Chilli Snakes” is a story of Nina and her fellow residents at Jolly Apartments, their petty politics, the shenanigans, hypocrisy, secret lives and betrayals. Generously peppered with humour, the book captures the lives of many suburban middle class families, their idiosyncrasies, their regional quirks, their unique lingo, their fears, insecurities and the shared lives they live as members of a 'housing society'.
About the author: Mamta Alva - Equipped with an MA (Eng. Lit.) from Mumbai University, Mamta Alva has spent over three years as televisions series scriptwriter. Mamta Alva is currently working with famous serial director Damini Kanwal Shetty on two popular serials on Sony television.
About Oxford Bookstore: Oxford Bookstore is a near iconic institution on Park Street, Kolkata. This 80-year-old, 6000 sq. ft, store in its new avatar offers a contemporary, multidimensional interactive experience in keeping with global trends. In January 2002 Oxford Bookstore opened its door in Mumbai, on the ground floor of Apeejay House in Churchgate with a unique product mix of books, music, gifts; internet, CHA BAR and Gallery. May 2003 saw the launch of Oxford Bookstore in Bangalore, at the Leela Galleria. The fourth store was opened on December 11, 2003 in Goa in the heart of popular Calangute area, opposite the St. Anthony’s chapel. In September 2004, Oxford Bookstore, New Delhi’s largest bookstore, opened its doors in the capital. Oxford Junior, the first dedicated bookstore for children in India, opened in Kolkata in August 2006. The other key stores of the chain across the country are in Goa, Shillong, Coimbatore, Bangalore, Chennai and Bhubaneswar. Oxford Bookstore is the only completely integrated online offline bookstore in the country with access to 6 million titles worldwide. www.oxfordbookstore.com provides special online shopping benefits and is the only one of its kind, hosted out of India. Computerworld Smithsonian Honors Archives & Academic Council recognized the path breaking work done by Oxford Bookstore by nominating it in the Business and Services category of the 2003 Computerworld Honors Collection. Oxford Bookstore is a part of the Apeejay Surrendra Group.
Posted by Frog Books at 11:10 PM No comments: