Not Just about Dancing 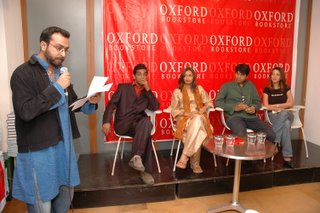 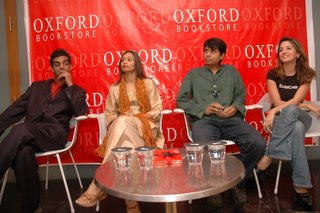 Mumbai, 9 January 2006: Rucha Humnabadkar today launched her debut, heartrending novel, Dance of the Fireflies, published by Frog Books, at Oxford Bookstore here. The session was presided over by acclaimed filmmaker Nagesh Kukunoor and leading Bollywood actor Perizad Zorabian, who also read out from the book.
“As a journalist, I have had several experiences with India’s street children and their relentless pursuit of dreams has been my inspiration. In fact, the protagonist of my novel is a young street child who survives the big city. The book zeroes in on keeping a dream alive in the face of adversity and brings to life the indomitable spirit of human endurance, hope and desire,” says Humnabadkar.
SYNOPSIS: Dance of the Fireflies is a heartrending novel set in India. In a quest to fulfil his dream, Chotu, a seven-year-old boy, leaves his remote village in South India for a life in the city. His pursuit takes him through a labyrinth of bittersweet experiences. Struck by hunger, and plagued by emotional and sexual abuse at the hands of Aslam, a man who takes advantage of his vulnerability, Chotu questions his decision to leave his village. He finds reprieve in his friendship with Tasneem, a young girl who loses her family when the tsunami waves devastate her village on the coast of Chennai. Their paths intertwine as each explores life and realises their destiny. Through their experiences we ascertain the implications of living a repressed life.
How do you forge friendships when trust becomes a fragile sentiment? How do you deal with the loss of family? Lastly, how do you keep a dream alive in the face of adversity? The novel is evocative of the noteworthy moments in most people’s lives.
AUTHOR BACKGROUND:
Humnabadkar, 27, born and raised in India, has written and directed three English-language plays and worked closely with acclaimed filmmaker Nagesh Kukunoor on his early films. She earned a master's degree from Carnegie Mellon University in the US, and currently works for eBay in northern California.
ABOUT FROG BOOKS:
Frog Books (http://www.frogbooks.net/), started in 2003, is the fastest-growing independent book publishing company in India today. It has so far published more than 40 titles which include fiction, non-fiction, cinema, children’s literature, poetry, social issues, journalism, business, graphic novels, travel writing. The authors published range from countries like New Zealand and Spain to Germany and the US, and comprise a wide spectrum of people from different classes, communities, experiences, genders and ages.
Posted by Frog Books at 1:42 AM 1 comment: