Now this guy is an absolute sweet heart. A true Gaysi supporter, lending a hand in times of need. A Mumbai boy, which places him in my “Never-To-Diss” list by default, yes…the rest of yous watch your back.
And oh! he also happens to be the Talk-Of-The-Town for his recently published book, “You are not alone”.

What prompted you to pen down “You are not alone”?
I wish I knew the answer to that question. One Saturday afternoon, I was completely bored out of my wits. Since I had nothing better to do, to kill time I began penning down random thoughts on my computer. And voila I had a prelude and chapter 1 to “You Are Not Alone”. I excitedly called up a few friends and read out to them what I had just written. The immediate reaction to what they had just heard was “WTF! You can write!!”
Initially, my writing was going to be for my own personal consumption. But after completing “You Are Not Alone” I realised that here I had a story that could be shared to build awareness about how normal the ‘gay’ life could be if you did have the support of the right people. We’re like anybody else at the end of the day and that’s the story my book tells.
A little bit about your journey from South Korea to Mumbai city?
I was born in South Korea, brought up in Taiwan and then my family eventually moved to Mumbai when I was 8. With this move to Mumbai I realised how much surroundings and society can impact and change your overall behavior. From being absolutely comfortable with who I was in a foreign country that cared little about an effeminate boy like me, in Mumbai, I felt intimidated, I felt noticed, I felt queer. I finally got comfortable in my skin and began falling in love with the city I initially hated so much. Mumbai has given me my family, my friends, my closest relationships. I can’t think of ever moving away from this city anymore.
Has life changed for you post decriminalization of IPC 377?
Homosexuality became dinner table conversation in my home only after the decriminalization of IPC 377 and the topic becoming front page news. That was the first time in my life that I realised that my parents didn’t have a prejudice for gay people and that gave me the courage to finally come out to them. My parents have been awfully supportive and “You Are Not Alone” would have not seen the light of day if it weren’t for their impeccable support. And of course without doubt, after the repeal of IPC 377, it feels great to not be an outlaw.
What was your experience in finding a willing publisher, considering the how Indian Gay authors have become flavor of the season for many publishing houses in India and overseas?
I had begun approaching publishers with my book a few months before the repeal of section 377. None of the publishers I approached wanted to take a risk with the book. I was either told “The subject is not commercially viable” or “This does not fit into our genre of fiction”. Finally, after 12 rejections, Leadstart Publishing had the mettle to publish the book and take a risk with the subject. Even in retrospect, if you look at the year gone by, only 2 mainstream books on the queer theme have been released in India. Quarantine by Rahul Mehta and mine. So are gay authors really the flavour of the season? As of today, maybe yes, but that definitely was not the case even as recent as 2009.
What would your advice be to young people struggling with their sexuality?
My advice would be, “Take your time, get comfortable with your sexuality. Speak to a confidante if you need to, it always helps. Finally come over to this side of the fence, its great!”
Future plans?
Currently, I am ideating for my next book which again will feature gay protagonists. I hope to continue to support the gay cause through my writing. And plus I continue to focus on doing well in my day job as an HR professional.
If you were to write a script for a Bollywood movie with a queer couple in the lead roles, who would you cast?
Interesting question! I will try not to be clichéd here and will definitely not say Abhishek Bacchhan and John Abraham. Even though I think John is extremely hot and would be extremely disappointed to not cast him in the film I write. Hmmmm, I think would cast Ranbir Kapoor and Sanjay Suri. I don’t think the pairing could get any more “queer” than that now! Would it?
(http://gaysifamily.com/2010/09/16/interview-author-arun-mirchandani/)
Posted by Frog Books at 6:26 AM No comments: 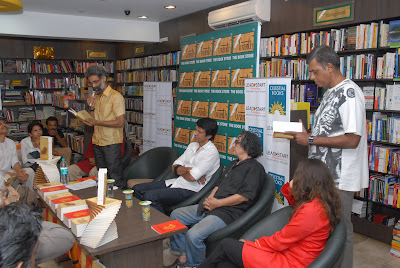 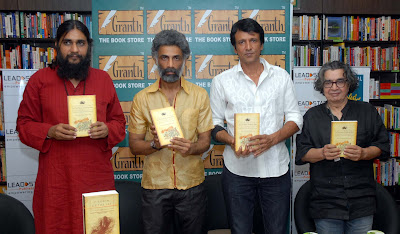 Three books by Raj Supe, published by Leadstart Publishing, were launched recently. Seen in the picture at the bottom are author Supe, actor and playwright Makarand Deshpande, Bollywood actor Kay Kay Menon, and theatre legend Satyadev Dubey, and (on the top picture) actor Pavan Malhotra and scriptwriter Shiv Subramaniam can also be spotted.
Posted by Frog Books at 9:59 AM 1 comment: