Who says Mumbai has no space?

“It’s cruel. It’s mean. Lacking as much in space as in courtesy; either you prosper or perish, take your pick.”
Encouraging words those. Especially coming, in one breath, from your cousin sister when this writer chose to fold tent in Delhi to make his uncertain way to scramble together a living in the then Bombay.
The year was 1992, and Bal Thackeray had not yet sicked his saffron louts on the minorities of Bhiwandi or Jogeshwari, and the city was swarming with millions.
Why was, you ma 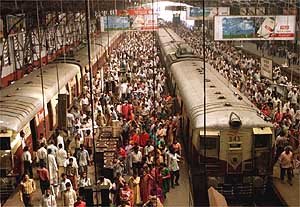 y ask. Isn’t today’s Mumbai the same as 1992, or for that matter, 1982 Bombay? Think again. Here is one city that has defied conventional wisdom; even made that wisdom stand on its head. It grew — and it is not as if you have seen the last of the trainloads of new migrants yet — like every other urban agglomeration. But, strikingly, the unceasing — unstoppable — dribble of human flotsam from elsewhere hasn’t quite choked Mumbai.
Far from it. In the early ’90s, the city apparently reached the pinnacle of its growth — not necessarily financially, but physically. Every morning people from the northern suburbs, and much beyond, even from Pune, packed themselves like sardines in that great lifeline called electric trains to reach downtown south. And the evenings saw the reverse flow.
The city population has been on the rise over the years, and there was no place to stay, squat or even stand in one of the most costliest metropolises of the world. The nerve-centre, of course, was Nariman Point and the adjoining Fort area, and the whole economy of the city, or the state, or the country, revolved around this district.
Anything overfilled has to burst, and it happened to this commercial hub — once a cluster of seven islands, which was, in 1661, presented as dowry to King Charles II of England when he married Princess Catherine de Braganza of Portugal. The burst (disintegration?) was almost unnoticed. In fact, it was not quite a violent one, but more like a big bang in a soundless, freeze-by-freeze slow motion.
As slowly, rather, as the clasp of tightening bodies on suburban trains (the best parameter to judge Mumbai's density) eventually started easing, and the space between flesh and flesh increased. And it took a few more years to realise that the city is not overcrowded anymore.
This may sound ludicrous to many a Mumbaiite, but, hello, you, just stop walking with the crowd, spare a minute of your choking schedule, and, for once, turn around to watch the crowd. Is the Great Unwashed still milling about you the way it was when you came to the city for the first time, say, five or ten years back, when you watched the Mumbai crowd in bemused helplessness?
Definitely not. Ergo, the city has changed. So, you might ask, how did it all happen? Obviously, no thanks to the efforts of the city fathers or the powerful BMC, admittedly the richest and most corrupt corporation in the country. Hand it to the enterprising denizens themselves — they started branching out, to the suburbs, to neighbouring boroughs in the Thane district, to the well-planned township of New Mumbai... and the crowd started dispersing.
Instead of the north-south-north daily grind, a whole range of new directions and reverse flows ensued. Instead of people massed like refugees and waiting for the predictable trains in particular hours of the day, the crowd got spread even. The modes of transport, too, changed: BEST buses, cabs, autos and even private vehicles — the latter being an unthinkable and non-practical thing to have in Mumbai till some years ago.
Several offices and small-scale factories sprung up in even residential areas of boroughs. And, with the exurbia coming to life, as it were, downtown Mumbai was not quite the same anymore. Come 6.30 pm, Monday (forget Saturday), and the swanky Nariman Point wears a deserted look — there were even reported cases of the highway robbery kind, the victims being those who had to work a couple of hours more.
Save for an HSBC or two, the fabled Fort area doesn't have snazzy offices anymore. Most offices, which could not afford exorbitant rentals at these places, have moved over to places like Parel, in central Mumbai, where they have set up spacious and affordable shop in what were once mill areas, the bread and butter of the city till a decade ago.
So, is it a welcome trend? Of course, yes, whichever way you slice it (except for the fact, perhaps, that there is a new pattern of unemployment becoming increasingly visible. But then, that is not restricted to Mumbai, is it?).
Just last week, this writer called up his Delhi cousin and assured her she has been proved wrong — eventually. And nobody knocked the caller down, as it used to happen. Once.
— Hindustan Times / 30 June 2006
Posted by Frog Books at 10:54 PM 1 comment: