Ramayana — The US Version

A young second generation Indian in the US was asked by his mother to explain the significance of "Diwali" to his younger brother, this is how he went about it... "So, like this dude had, like, a big cool kingdom and people liked him. But, like, his step-mom, or something, was kind of a bitch, and she forced her husband to, like, send this cool-dude, he was Ram, to some national forest or something... Since he was going, for like, something like more than 10 years or so.. he decided to get his wife and his bro along... you know... so that they could all chill out together. But Dude, the forest was reeeeal scary shit... really man... they had monkeys and devils and shit like that. But this dude, Ram, kicked ass with darts and bows and arrows... so it was fine. But then some bad gangsta boys, some jerk called Ravan, picks up his babe (Sita) and lures her away to his hood. And boy, was our man, and also his bro, Laxman, pissed... And you don't piss this son-of-a-gun cuz, he just kicks ass and like... all the gods were with him... So anyways, you don't mess with gods. So, Ram, and his bro get an army of monkeys... Dude, don't ask me how they trained the damn monkeys... just go along with me, ok...
So, Ram, Lax and their monkeys whip this gangsta's ass in his own hood. Anyways, by this time, their time's up in the forest... and anyways... it gets kinda boring, you know... no TV or malls or shit like that. So,they decided to hitch a ride back home... and when the people realize that our dude, his bro and the wife are back home... they thought, well, you know, at least they deserve something nice... and they didn't have any bars or clubs in those days... so they couldn't take them out for a drink, so they, like, decided to smoke and shit... and since they also had some lamps, they lit the lamps also... so it was pretty cooool... you know with all those fireworks... Really, they even had some local band play along with the fireworks... and you know, what, dude, that was the very first, no kidding..., that was the very first music-synchronized fireworks... you know, like the 4th of July stuff, but just, more cooler and stuff, you know. And, so dude, that was how, like, this festival started."
(Forwarded by my colleague, Pranali Patil)
Posted by Frog Books at 11:50 PM No comments:

Bush and Chimp: Made for each other 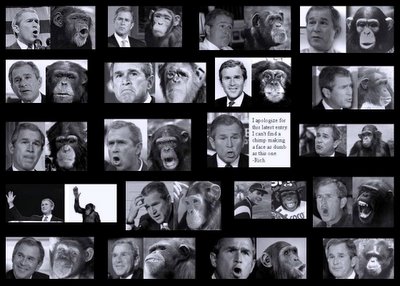 Graduate in a Day