This slim book comes as a whiff of fresh air in these times of the rotting smell originating from a whole lot of junk which is apparently called “Indian writing in English published by Indian publishers”. Sonia Faleiro, a journalist with the venerable Tehelka magazine and a debutante author, has done a remarkable job by penning The Girl, an outstanding lyricism set in a fabulous, magically-realistic place like Azul village in Goa.
Now, while saying that the story develops and ripens in a place like Goa, do not get this notion that it is all about “picture-postcard Goa”. Far from it. It is about the angst, agony and disillusionment, the death, the bareness of the sultry land, the feni, the pork, the plain wastefulness and lethargy of a sleepy terrain, the cemeteries…
Faleiro’s is a very powerful work in that poetry and life merge with subtle felicity and is one of the best works that have come out in India in recent times; what makes this effort worthwhile is that the author is quite young to achieve this feat. It is quite Marquezian in its plotting, narration and style. Savouring this book and many a time you will be reminded of One Hundred Years of Solitude — it is a sheer pleasure, thank you. Azul is Macando.
The novel starts with a promising note: a funeral. A girl is buried on a depressing December evening, and the place is a drowsy hamlet in north Goa. Look at this imagery: “The air was thick with rose petals. Sweet, fleshy skins, red, yellow, pink, orange, waltzed with the wind before falling gently to earth. Her grave was a bed of roses... The fragrance of red rose and pink rose and fresh rose and dead rose.” You cannot get it better.
So, this girl is dead, but there are these two guys who knew her quite well and loved her, too. And they are curious like a cat, to know and to discover what went wrong and why she died. A spy job. What best way other than referring to her diary? So they devour it. The go through the pages she had penned in her sanity or lack of it and they discover — and share with her, though she is dead — “the loneliness and abandonment, of memories branded so deep that they return to haunt the soul, and of hope so powerful that it negates reality and opens the doors to a future that is never to be.” And at the end is the discovery of love and betrayal.
The character that attracts you most in the whole book is the twenty-six-year old Simon. And, yes, his mother too. Simon runs this derelict shop (that contains “orange juice well past its expiry date” and “postcards commemorating the hundred-and-twenty-fifth anniversary of the reconstruction of St Jude’s ten years ago”) and his sole customer was this girl who died. Later he reconstructs it (so wittily described) with the help of two quirky comrades and his mother takes charge. A joyful read.
Faleiro has done fantastic job and one hopes she will continue to do it. Bravo. Well, if it doesn’t sound PRish, a suggestion: do buy this book.
— Sunil K Poolani
Posted by Frog Books at 3:31 AM No comments: 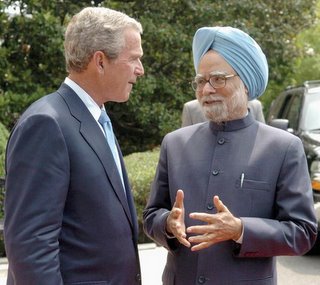 It is with both great happiness and grave apprehension that we the people of India await your arrival in our country. Happiness because in the few hours you will be engaged in shaking hands with our country's leaders your fingers will be — at least for a little while — away from the nuclear doomsday button. Happiness also in the hope that the grease you put on the palms of your political underlings here will make the many triggers all of you control that much more slippery.
There is a lot of apprehension too as your visit could become the latest source of pollution in our ancient land already poisoned over the years by your country's various multinationals- from Union Carbide of Bhopal gas notoriety to Monsanto of GM seeds infamy.
Your own crimes against humanity in Iraq, Afghanistan and Guantanamo are of course far worse than that of these corporations and if the Ganges were not already as contaminated as it is unfortunately today — we would have happily recommended a long dip in its holy waters.
We know you have friends — or shall we call them loyal subjects- in very high places in our country. Shri Manmohan Singh, misleadingly called 'Prime Minister of India' when he is really a CEO of your subsidiary company — will be there constantly at your beck and call. But then for this former civil savant turned international servant- whose soul and spine were stolen many moons ago by the IMF, World Bank and other dark forces you represent — it seems to make little difference what master he serves.
You will also find the Congress that rules India even more pliant than the US Congress you control back home. Having buried Gandhi and Nehru in both body and spirit long, long ago this political party that once fought the British Empire has become the Trojan horse of American Imperialism in India.
There are others too from our country that will welcome you — captains of industry, merchants, bureaucrats and sections of the Indian media- who already think of themselves as junior partners in your vile Empire. The truth is they are as much in awe of the weapons of war you so wantonly wield as they are mesmerized by the petty commercial carrots you dangle before their eyes.
But make no mistake 'Mr Wannabe President of the World' — India is far more than the name of your pet cat on the lawns of the White House. And though our leaders lovingly wag their tails at you it is not a domesticated dog either.
Instead it is a full-blooded country of over a billion people who have seen through many tyrants of your type several times over in their long history. We packed off the British Raj just over half a century ago and have no intentions of letting its American offspring sit on our heads instead.
And we are not alone in our struggle against Imperialism on this globe either.
From Vietnam to Venezuela and Iraq to Indonesia we have had and continue to have deep ties with people everywhere from around the world who have stood up in defence of their national dignity, sovereignty and the right to conduct their affairs in whatever manner they see fit. We have long historical memories too of the US establishment's atrocities and massacres around the globe Hiroshima, Haiti, Greece, Guatemala. Cambodia, Chile — the sacrifices of countless brave citizens will not go in vain.
Your regime's latest attempts to bully or bribe the Indian government to join your machinations against Iran will also go nowhere because the people of this country will forever resist your immoral attempts to capture the assets of weaker nations by force. By tempting the foolish Indian government with a dubious nuclear pact you have attempted to divide and rule the developing world but we can see through your imperial politics and have the means to unravel it too. Your concern for the `national interest' of India in striking a nuclear deal is going to make our country powerful to the point of extinction.
Mr 'Emperor', not only you do not have any clothes on, you are trying to pull some non-existent textile over our eyes too! So Mr 'Emperor' when you soon land in India remember — irrespective of what your weather 'experts' tell you- the temperature on the ground will be several degrees hotter than anybody can predict. True, this will be partly due to the general rise in global temperatures your regime has so wantonly contributed to plus the hot air you have such a talent for — but much of the heat will really be due to the burning anger aroused by your presence in our midst.
Believe us we promise a very warm welcome to you and all in your entourage and hope to make your trip as memorable as possible. This collection of films on the crimes of your country's various regimes we are showing the Indian public around the country is just the first of many salvoes we are firing.
It is still not too late to turn your jets back to Washington where Uncle Dick 'Shotgun' Cheney eagerly awaits your presence on a long and exciting safari somewhere. Happy hunting and watch your back.
Yours very, very warmly
Films for Peace Team
Posted by Frog Books at 5:51 AM No comments:

Discussing the Rape of News 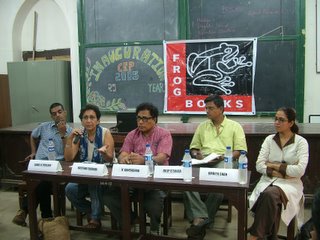 Frog Books arranged a seminar at Wilson College, Mumbai, for its journalism students. The theme of the seminar was, "Should Papers Sell Editorial Space". Seen (from left) are: Sunil K Poolani, publisher and managing editor of Frog Books and the editor of The Rape of News, which tackled the issue; Kalpana Sharma, deputy editor, The Hindu; V Gangadhar, well-known media critic and senior journalist; Dilip D'Souza, columnist and activist; and Amirta Shah, cossulting editor of The Indian Express.
Posted by Frog Books at 5:35 AM 1 comment: