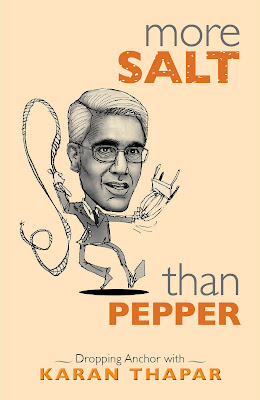 Sunil K Poolani
---------------------------------------------
More Salt Than Pepper
Karan Thapar
Harper Collins
Price: 399; Pages: 255
---------------------------------------------
Every Sunday when you open the pages of Hindustan Times, you see the mug shot of Karan Thapar followed by his weekly ruminations. Over the years the nature of the column has had started losing its lustre (but once in a while it shines, when he is in his element).
Like the clipped accent he uses while he interviews celebrities or newsmakers on the telly, his columns, too, started looking irritating ramblings at times — a reason why I had stopped reading him long time ago. But, when, I got this book for review — the best of Thapar columns — I was really amazed at the range and subtle humour he had used in his earlier columns that I had missed several times; but my basic indifference to his writing has not changed, though.
Thapar’s pedigree, education (Doon, Cambridge) and contacts have made him go places. He is one of the pioneers of television journalism in India and has been a columnist from eons. And currently he is the host of shows on CNN-IBN and CNBC and is the head of Infotainment Television.
Now, coming back to his columns, he has written about almost all the aspects that unfurled in Indian society and polity every week. Most of them are witty and direct to the point but in several columns himself and his family and friends find a prominent place: his influence, his family’s contacts, name-dropping, you name it you have it.
Savour the one on Indira Gandhi. Once he and his sisters were going for a concert with Mrs Gandhi and her children. The then PM advices the kids to go to the loo (“There won’t be any where we’re going”). So when Thapar’s sister asks the mighty woman what if the PM did when she felt the urge, Mrs Gandhi said: “It’s tricky… It’s so much easier for a man. All they have to do is pop behind a tree. But you can imagine what would happen if I tired that?”
The book is full of these anecdotes, be it of Khushwant Singh, Manmohan Singh, L K Advani, Kapil Dev… In one column he tells how his uncle, Gautam Sahgal, proposed to Nehru’s niece, Nayantara Pandit, and she accepted. But Nehru was not keen on it. In order to show how much influence Edwina Mountbatten had over Nehru, Thapar tries to establish that only because of Edwina did that the marriage ever take place.
Thapar thinks India is a funny place and London is the most civilised city in the world; how Amar Singh donated ten lakh rupees to Doon School; how one Lt. Gen, M N Batra was smitten by Thapar’s mother when she was young; how Khushwant Singh still likes to kick around… it goes on and on.
Arguably the best section in the whole volume is ‘Between the Covers’. Here, too, he takes pot shots at people he dislikes of; like Madhu Trehan. Her book on the Tehelka scam, Thapar says, is “reams of unedited interviews which meander unstructuredly, often losing sight of purpose and frequently dissolving into pointless chatter in disconcerting slang.”
Then there is another column in which he regretted interviewing Benazir Bhutto’s biographer Shyam Bhatia… in another how he regretted not giving Vikram Chandra a job in Hindustan Times… and also how he embarked on a writing career in HT… Phew.
Yes, the book is interesting; in bits and parts. But what I do not understand is what the need for this compilation is? There is no concrete journalism, forget lucid insights or foresights. What I can conclude is that it is just a writer’s vanity exercise to see some of his works in one bound volume. And yes, for the publisher the name sells.
— Sahara Time
Posted by Frog Books at 7:33 AM 3 comments: