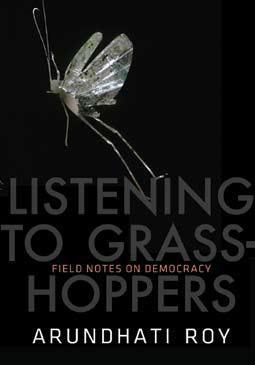 Sunil K Poolani
-----------------------------------------------------
Listening to Grasshoppers: Field Notes on Democracy
Arundhati Roy
Hamish Hamilton
Price: 499; Pages: 252
-----------------------------------------------------
There was a nice, short girl from the riverside of a Kerala village who wrote a book in the mid-nineties. A sweet, small novel which was likeable but immensely forgettable. But it was not the case. The staccato style she employed got the attention of the Booker judges and it went on to win that coveted award, thanks to which millions of copies were sold, and still counting.
Arundhati Roy became a household name since then. But there was a noticeable lull period in her writing. Her next avatar was in the form of a ‘crusader’, but purely as a heavily subjective commentator who voiced her views in the form of non-fiction but with poetic cadences — which for many was like blurring the lines of fact and fiction. Nevertheless, she was serious.
The Narmada movement led by Medha Patkar was her first foray into her campaigner career that would then span more than a decade. It was a small trip from Meenachil to Narmada, then. Since then she has travelled all over the world; there is hardly any political party, any fundamental religious group, any despicable dictatorship in the world that has not failed to face her wrath.
I have been observing this little-bird-lady for more than a decade, like most of her readers spread across continents. She is determined; and always gets into trouble (including a token one-day jail sentence for ‘insulting’ the judiciary); makes enemies faster than ‘War Criminal’ Bush; and I have an inane feeling that Roy enjoys them all.
There are two Roys. One, a totally devoted, sharp, meticulous and daring Roy who does her homework very meticulously and comes up with periodic commentaries on issues that we tend to sweep under the carpet. An eye-opener Roy.
Then there is the maverick Roy, who finds gratification in upsetting many an applecarta; mightier the better. She is like this: there is a calamity that affects India or things closer to the polity of the country — be it the Bombay terror attacks or the Gujarat genocide — and, voila, you can expect her to comment on that very soon. And make provocative statements (of course, there is truth in what she says) to incite (mostly the neo-Hindutva elements) the masses, or the lay English-language reader.
Admit it. She is very much part of us, but aloof, almost invisible; not present even for the launch of her book in question, Listening to Grasshoppers, which is a collection of her essays that have had appeared in national and international media on all issues close to her heart; and in some way to us, too. Most of the stuff we have read, along these years. And most of them have earned her more brickbats than bouquets. Be it questioning the media, be it how a democratically elected state government like Narendra Modi’s orchestrating a pogrom, be it how the Parliament attack accused have been vilified, be it…. whatever.
Reading through most of the articles in the book, which are not updated “intentionally”, one comes to realise that, how much ever we hate Roy, we love her in an equal measure.
Love her or hate her, she is going to be with us. As a mirror. Doesn’t matter if she is not at all objective in her views. And, yes, she mixes verse and worse in equal measures.
This book should be more of a reference guide and a ready-reckoner than just a book that should be read and stashed away.
Posted by Frog Books at 10:30 AM 18 comments: