Savour two of his poems:

Renunciation
First light on the kitchen table
Breakfast for one. Beer and wine.
Feline eyes kiss fallen tart.
Lunch's a conceit of three. My cat,
Your snapshot and me. Secret rum
In mint tea. Invalidation of the sea.
Last light comes to sup. Dinner's a feat
In Rectitude. Water and Whisky.
Campaign of shadows. No despair.
A sliver of music around the ankles
In a dream's corridor.
Endless retreat of inaccessible feet.

Prospect
While you were sleeping
A dog yawned in the sun
And in the distance,
A train, blindfolded by a tunnel,
Window by window
Regained vision.
I thought of all the things
That could happen
When we are looking away,
The universe we miss in a blink.
Posted by Frog Books at 1:04 AM 1 comment:

They may be second-hand, but definitely not second-best. We’re talking books here. Mumbai’s obsession with old and rare books is now at its peak. There are at least two dozen bookshops — and no, we’re not including raddiwallas — in the metropolis that deal exclusively in such books. Leading the pack is the legendary New and Second-Hand Bookstall (NSB), near Metro Cinema.
Established in the early 20th century, NSB continues to be the favourite haunt of every resident and visiting literary aficionado. And the bookshop is virtually a literary minefield, where a customer is expected to hunt for the books he seeks on his own. The staffers are rarely of any help since few of them know about the treasures the shop contains.
Walter Z Sodenberg, a German national who lives and writes in Cambridge, was in Mumbai recently. He talks of NSB: “I have come across the most amazing collection of books [at NSB], and the prices are unbelievably reasonable. For instance, I’ve managed to lay my hands on the first prints of H G Wells’ works, which I don’t think I could find anywhere else in the world. Here I found not only reprints, but also first editions, for just Rs 125 each. That’s just US $3.50. It’s amazing.”
On a recent visit to the city, Olivier Todd, celebrated French writer and Albert Camus’ official biographer, said: “In Bombay (oops! I can never pronounce the new name), I could find a great variety of books, including French classics, which I bought for a very reasonable price. I might have had to shell out an astronomical sum if I had to purchase these from Milan or Paris — that is if they are available there at all.”
And the tribe of Sodenbergs and Todds is on the rise. In a survey conducted by some students of St Xavier’s College recently, the demand for second-hand and rare books went up by 30 per cent in just last year. Most people who were interviewed for the students’ project said they bought these books more as collectors’ items, rather than just to read them.
Sample some of the gems that have changed hands, courtesy these bookshops:
1) Complete bound issues of National Geographic and Playboy magazines from the date of their inception — Rs 50 for a 12-volume set
2) The first prints of James Joyce’s unabridged and uncensored Ulysses — Rs 50 each
3) An early 19th century biography of Chhatrapati Shivaji by an unknown Marathi author — Rs 200
4) An original copy of Venus in Furs by Leopold von Sacher-Masoch — a mere Rs 5.
Incredibly cheap, one would say, but these books find their way into the international markets, including major auction houses in London, the city of book-lovers, where sometimes a single title could fetch the occasional buyer-seller a fortune. And the books that find their way outside are not just rare books published in India (in languages as varied as Pali, Sanskrit, Mythili and Chentamil), but books published from practically every nook and cranny of the world.
Curiously, the shops buy these books at dirt-cheap prices or, as in several cases, the books fall into their laps free of cost. Says Meher Mistry, 71, an avid book collector who has spent a considerable chunk of his earnings to build up a library of rare books, magazines and other memorabilia: “[Most of these books] really belonged to several old mansions in south and central Mumbai, which have been demolished over the years. Books, unlike other art and artefacts, are literally thrown out as garbage. And a major collection of my books are this garbage.” The worth of Mistry’s collection is pegged at more than Rs 1 crore, though he is unwilling to sell even a single title.
Apart from the bookshops, the biggest delight of second-hand book buffs is the roads in and around Flora Fountain. In a stretch of about two kilometres — on which educated, Shakespeare-quoting street vendors have hawked books for the past 20-30 years — around 200,000 books are up for grabs. Every day. About 80 per cent of them are used books. All types are available here: fiction, non-fiction, technical, non-technical, you name it, you grab it.
The Mumbai book market has generated so much interest that the Internet is full of praise. One enchanted traveller once wrote on a site: “Any self-respecting Bombaywallah would have bought at least one book from [the vendors around Flora Fountain] at least once. I should mention, however, that the favourite haunt of book maniacs would be the thousands(!) of street vendors or stalls well littered all around Mumbai.”
“It is at these book stores that one can get the best bargains or choices and the joy of finding a rare book that one has been searching, for a throwaway price — not to mention the atmosphere in which one can chat with other hunters while browsing through the books,” says Suma Josson, author and filmmaker.
Now, it is not just individual collectors who are throwing their hat into the ring. Big corporate houses and hotels are also stacking up old and rare books — of course, in good condition, and preferably gold-rimmed — in their showcases. The money at stake here is definitely higher.
Predictably, several of these collectors’ items are found in bad condition — due, in the main, to poor handling (even in bookstores) and weather conditions — so, they require professional retouching, which itself is a business on the rise, but that is another story, and will save for another day.
— Sunil K Poolani
Posted by Frog Books at 1:46 AM No comments:

The eddying mountain breeze and the dizzying heights did not dither their enthusiasm and courage. In fact they were the accentuated factors in the salubrious terrains they were cycling — yes, cycling, not traipsing. But victory never comes on a platter. You have to puff, huff and struggle to achieve it — and make history, too, in the bargain.
We are talking about the recently-held mountain bike racing, a first in India and only the third one of its kind in the whole universe. The Hercules MTB Himachal championship was a mountain cycling adventure and an endurance race where 23 amateur and professional Indian and international riders employed all their verve, zest and skills over the mind-blowing landscape of the Himalayan backcountry of Himachal Pradesh. They bounced, grunted and pedalled through 480 kms of wilderness trails.
This was a perfect test of physical endurance and mental determination for mountain cycling enthusiasts. It should be. For, mountain biking experts Cara Coolbaugh from the US and Cass Gilbert from the UK spent over three months designing the track — and they are difficult taskmasters.
The starting point of the eight-day event was the Historic Peterhoff Grounds in Shimla and the end point on the first day was the Sports Authority of India training centre in Shilaroo. The route then followed the famous apple orchards of Kotgarh — crossed the mighty Sutlej at Dutt Nagar and camped alongside the river at Bayal.
The third to the eighth day took the riders to the picturesque villages in the interior parts of Shimla, Mandi and Kullu districts of the essential Himalayan backcountry. The event passed through the venue of the celebrations of the famous Kullu Dusshera on the last day. The event rode trails, single tracks, dirt roads, and rivulets of the Hill State spanning these three districts. After the final stage, times were calculated to determine the champion.
Riders, including three women, were from the US, Belgium, Hungary, South Africa, Denmark, Singapore, the UK, and India. Norbert Szenthihlosi from Hungary won the championship title after beating the 22 other spirited challengers. The runner-up was Franc Nel from South Africa, followed by Per Nilesen from Denmark.
Says Mohit Sood, the president of the Himalayan Adventure Sports and Tourism Promotion Association, which conceptualised and organised the event: “We are working towards promoting Himachal as the best adventure tourism destination in the world and through this event we want to present to the world the potential of the Himalayas and how it can be nurtured by way of promoting the ecologically and environmentally friendly sport of mountain biking which has tremendous potential to grow in this part of the Himalayas.”
In fact, the championship was organised as a wilderness mountain bike race, where participants slept in tent villages that were set up prior to their arrival and broken down immediately after the start each morning. During these eight days, enthusiasts endured the climate and physical challenges of the Himachal Himalayas. Stages included breakfast, a pre-designated lunch area, beverages along the route, dinner and an awards ceremony each night where the winners were awarded Leader Jerseys.
Ashok Thakur, the tourism secretary of Himachal Pradesh, was confident that the event will surely boost cycle tourism in the country. “And I am sure this event will set new trends in cycling and spark off many more such challenging and exciting events for biking.”
And glimpsing this spectacular extravaganza which gave an idea of the beautiful, punishing but enjoyable trail one tends to believe so.
— Sunil K Poolani
Posted by Frog Books at 5:01 AM No comments: 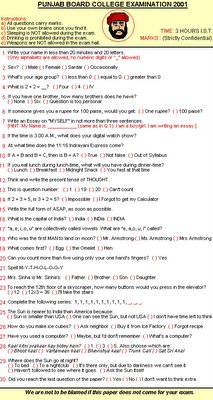 Hi pals, I rarely save and keep any Internet jokes that bombard my email box. But this is really cool, I have to say, please try looking at it and you will never regret the decision.
Posted by Frog Books at 12:50 AM No comments: